When visiting countries in the so-called ‘developed world’, we often assume that ancient traditional crafts are a thing of the past and that they no longer exist in the modern world. However, this is not always true. At local level, many still preserve the vocation and trade that was passed down from earlier generations.

In Italy, the northeastern region of Friuli Venezia Giulia proposes a new way of discovering such gems in hidden places off the beaten track. How? With the so-called “ecomuseums”, which are a form of innovative museums that preserve, interpret and communicate the identity of the local communities.

Ecomuseums are places where the population takes care of the local heritage giving value to the landscape and to the material and immaterial cultural assets preserved there. This ensures the protection of the territory and its biodiversity, and also the renewal of life and work practices, local productions, and traditional knowledge.

As of January 2015, there are 4 ecomuseums in Friuli Venezia Giulia… let’s explore them together! 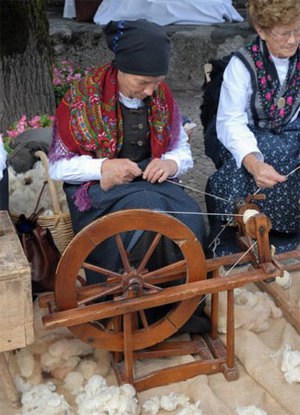 This ecomuseum was born to preserve and enhance the heritage of the community in the Valley of Paularo. Here, work is seen as the link between the population and its territory. Accordingly, “I Mistîrs” focuses on the safeguard of ancient trades and the rediscovery of forgotten professional figures.

The ecomuseum combines the “culture of knowledge” with the “art of being able to make” through ethnographic collections, animations and workshops. When visiting the Paularo Valley you can plunge into the everyday life of the past, learn old working techniques and witness the use of original tools.

There is also a special event that celebrates specifically such local traditions: at the end of August, the local population from Paularo and the surrounding Carnia area reunites in the Fieste dai Mistîrs, a festival during which artisans showcase their ancient crafts and techniques in the streets.

The Waters of the Gemona area ecomuseum

As the name suggests, this ecomuseum is centered on water, which is at the origin of the formation of the territory. In fact, the Ecomuseum of the Waters extends over the Osoppo-Gemona plain (the so-called Campo), an alluvial plain completely surrounded by reliefs and crossed by the Tagliamento river.

For centuries man has been intervening in this area, taking the waters and administering the underlying hydrographic network, digging irrigation ditches and raising embankments, building factories and producing energy.

The ecomuseum proposes a new model of territory management that preserves the natural sites (sources, lakes, rivers) as well as the material and immaterial culture (irrigation ditches, mills, wells, life and work practices, traditional knowledge). The objective? To ensure that the area develops in an environmentally, economically and socially sustainable way, with the participation of the local community.

The Ecomuseum of the Waters houses the Museum of milling art, a Water documentation centre and an Educational workshop at the disposal of teachers, students, researchers and tourists.

This is the ecomuseum of the Friulan Dolomites, and operates in a mountain and rural context in which the preservation of the identity and the safeguard of the local heritage are essential conditions for the growth of the territory itself and of its communities.

The ecomuseum promotes the use of the community heritage and assets for environmental and landscape protection, for cultural and civil promotion, to recover knowledge and traditions, and to hand these down to the young generation.

Your itinerary at the Lis Aganis Ecomuseum revolves around water, stones and trades. Events, exhibitions, competitions and research activities involve the local population as well as visitors in cross-disciplinary projects that allow you to explore and keep alive the heritage of the local community.

The Resia Valley is a magic Alpine valley surrounded by wild nature and inhabited by a population that has been able to keep its own language, culture and customs almost unchanged over time. The local ecomuseum aims at enhancing the community by providing ideas and evidence to identify and classify all the peculiar natural, historical and cultural aspects of this territory.

The Val Resia Ecomuseum is mainly a set of physical and cultural paths to be followed with one’s body and mind to “explore” the valley and the people who lived and live here, including the path of the ancient Glaciers, of the Alpine huts, of the Stavoli shelters and the path of Music.
You will notice signs that guide hikers through these mesmerizing paths: the choice of writing the boards in two languages – Italian and Resian – also highlights and enhances the ethnical and linguistic uniqueness of Resia.

Would you like to explore a different side of Italy? To discover knowledge, uses and traditions that have been preserved and revived by local communities? Discover hidden, yet rich and lively gems with Italian Special Occasions DMC!

The historic and artistic treasures of Friuli Venezia Giulia