North vs South: Italy’s Carnivals off the beaten track

If you are suffering from the February “blues” – i.e. you live somewhere with long winters and you have had enough of hibernating inside from the cold and dreary outdoors – it is time for a colorful and energizing break. And Italy offers just that with its thrilling Carnival events!

The most famous Carnival celebrations take place in Venice in northern Italy (see How to make a Mask, Venetian style), Viareggio in central Italy, and Putignano in the south of the boot (see Europe’s oldest and longest Carnival rocks southern Italy).

However, there are many less known, yet historic Carnivals that spice up off-the-beaten-track areas around Italy. Let’s explore some of them in today’s post: the Carnival of Ivrea (Piedmont) and the ones of Sciacca and Acireale (Sicily).

Carnival of Ivrea: watch out for oranges! 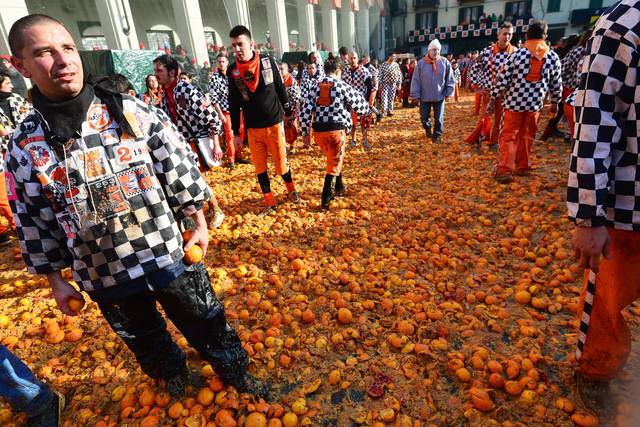 The spirit behind the Carnival of Ivrea is the re-enactment of the city’s liberation from tyranny back in medieval times: a baron who starved the city was driven away thanks to a miller’s daughter (Mugnaia) who rebelled against the jus primae noctis (an alleged “right” of lords to spend a night with newly-wed women), and roused the people to revolt.

Every year, Ivrea locals elect fellow citizens as the main protagonists of the story: the Mugnaia, the General, the Stato Maggiore (officers on horseback), the Assistant Grand Chancellor, the Magnifico Podestà. The Carnival also features a parade with the Flags of the Parishes and with Pipes and Drums.

What really stands out here at the Carnival of Ivrea is the spectacular Battle of the Oranges, which actually symbolizes the people’s rebellion against tyranny. During the battle, orange throwers on foot without any protection represent the revolutionaries. They throw oranges at the feudal lord’s army, personified by others throwing oranges from horse-drawn carriages, who wear protective masks reminiscent of ancient armor.

If you happen to be in Ivrea in the period preceding the Battle starting from the Thursday before Lent, you will notice townspeople and other visitors wearing the “Phrygian cap” (Berretto Frigio) as they go about their business in the streets. This red stocking-like hat symbolizes their support for revolt and their aspiration to freedom.

The Carnival of Ivrea was institutionalized in 1808, while the Battle of the Oranges – Italy’s largest food fight – started after World War II. In 2014, the battle took place on March 2nd and it attracted up to 50,000 visitors worldwide. In 2015, it will take place on February 15th and 16th. Do not miss it if you are around Turin, after all Ivrea is only a 40-minute drive away.

Even if the weather is not great, the colors of the medieval costumes, the scent of the oranges and the energy of the battle will make the experience extra special! And you can keep warm with the typical fagiolata, the Carnival bean soup distributed around town to remember the poor conditions of the local population back in the days. For a first-hand experience of the Carnival, read “Ivrea: THE Carnival in Piedmont” by Turin Epicurean Capital

A fantasy world in authentic Sicily

Sicily is the stage of different large and small Carnival celebrations. Among the most characteristic and unmissable are the events at Sciacca and Acireale.

The Carnival of Sciacca, near Agrigento, is one of the most ancient in the island; in fact, the origins go back to 1616 when Viceroy Ossuna announced that everyone should dress in masks for Fat Tuesday. 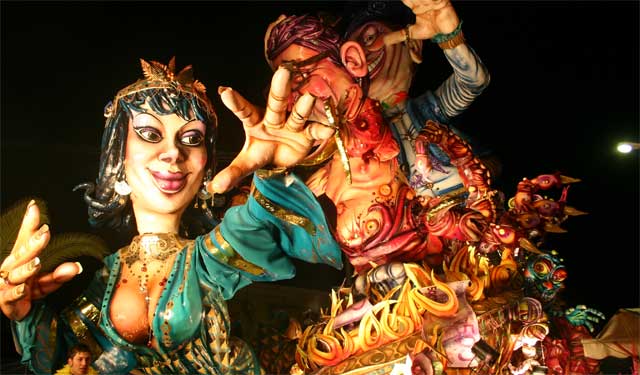 What characterizes this celebration, apart from the colors and cheerfulness of the party, is the ingenious “technology” behind the floats created with the participation of architects, artisans and sculptors. The figures represented on the carriages often perform quite “advanced” movements thanks to ingenious techniques and solutions.
The preparations start many months before with the engagement of the locals and the Arts Institute of Sciacca, and culminate with the assembly of the majestic floats on the streets themselves. The Carnival starts on Fat Thursday with the symbolic handing of the city’s keys to the King of the Carnival, Peppe Nappa, which is the local traditional mask. Throughout the event,  Nappa’s carriage distribute wine  and grilled sausages to the public on the street. The celebrations end on Fat Tuesday when Peppe Nappa’s float is burnt in the main square.

Sciacca’s fiercest competitor is the Carnival of Acireale, a Baroque city near Catania. It is often hailed as Sicily’s “most beautiful Carnival”. Since the 1700s, the main protagonist here is the Abbatazzu or Pueta Minutizzu, a folk poet that improvises funny and satirical rhymes.

Whereas in the 19th century the parade featured distinguished, horse-led carriages from which nobles launched confetti and candies at spectators, in the 1930s these were substituted by papier-mâché masks and carriages led by steers that slowly engaged the entire local population. These floats are truly imaginative and at times outrageous and grotesque, making Acireale’s Carnival truly spectacular!

If you cannot make it to the Carnival in February, do not worry: locals love it so much that the act is repeated in August!

Meanwhile, enjoy this video that can give you a tiny idea of the splendor, heritage, spectacle and excitement that explode in the streets of Acireale during this special event.

Photo credits:
Battle of the Oranges during Ivrea Carnival, from turismotorino.org
A carpet of oranges after the battle! Note: oranges must be imported from Sicily, mainly coming from the leftovers of the winter crop. Image from Zingarate.
The Carnival in Sciacca, Sicily. Image from Sicilia Informazioni

How to… make a mask, Venetian style!