“When you look at Basilicata you see fields, vineyards, beautiful scenery. You see the earth as it was supposed to be.”
Francis Ford Coppola 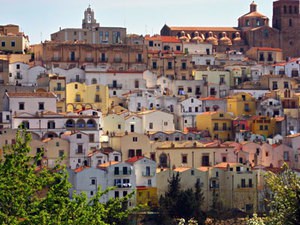 In over 50 years, more than 40 movies have been filmed in Basilicata. Throughout time, this region of southern Italy has continued to amaze Italian and international filmmakers with its delights and dramatic landscapes, such as the Sassi of Matera, the moon-like scenery of the ravines, the sun-drenched vineyards of Mount Vulture and the small villages perched on the mountains.

This varied natural stage set has inspired great filmmaking with a number of different genres: biblical and spiritual movies, neorealism, comedies, costume dramas and horrors. Let’s have a look at some itineraries along the locations where the most important movies were filmed.

Matera, one of the oldest inhabited cities in the world, is famous for its ancient cave dwellings called Sassi, a UNESCO World Heritage Site since 1993. Thanks to its similarity to Palestine, most of the movies filmed in Matera talk about religious stories, for example: The Gospel according to St. Matthew (Pier Paolo Pasolini, 1964), King David (Bruce Beresford, 1985), The Passion of the Christ (Mel Gibson, 2003) and the Nativity Story (Catherine Hardwicke, 2006).

Via Muro – This stunning street has hosted both the directors Mel Gibson and Catherine Hardwicke. In the Passion of the Christ, Via Muro is the Way of the Cross in the midst of the Calvary of Jesus; while in the Nativity the street’s spectacular flight of steps is the village’s meeting place with stalls and exotic palms. 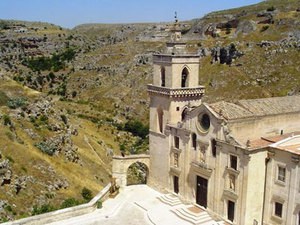 San Pietro Caveoso – This majestic Church towers above the canyon and its square was immortalized in movies like L’uomo delle stelle (Giuseppe Tornatore, 1995) and L’albero di Guernica (Ferdinando Arrabal, 1975).
Malve District – Its rocky churches and deep caves were the set for both the Passion and King David.

Porta Pistola –This square overlooks the spectacular gullies of the canyon, and has represented the Gates to the city of Jerusalem.

Madonna delle Virtù and San Nicola dei Greci – This mesmerizing rock complex was where the scenes of the Last Supper was filmed.

Murgia Park – The breath-taking and immense scenery beyond the canyon was used in almost all of the movies about Jesus: in The Gospel it hosted the Holy Sepulchre; in the Passion it depicts Christ’s childhood; while in the Nativity is represented Bethlehem.

Murgia Timone – This Neolithic village was the set for the Crucifixion scenes in the movies of Pasolini and Gibson.

The country villages of Craco, Aliano, Irsina and Ferrandina were also the setting for some scenes of the aforementioned religious movies. But their farming communities were also portrayed in other films, such as the memoir of Carlo Levi in Christ stopped at Eboli (Francesco Rosi, 1978) and the stories in the social microcosm of Del Perduto Amore (Michele Placido, 1998). 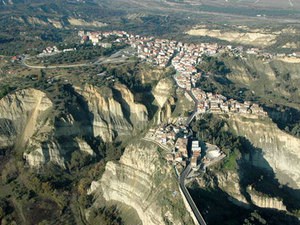 Aliano – After crossing the lunar landscape of the ravines, you reach this small town which was featured both in Rosi’s movie about Carlo Levi, and Hardwicke’s masterpiece as the village of Ginea.

Irsina and Ferrandina – These were the filming locations of Placido’s movie, Del Perduto Amore. The squares, the streets, the farms of the two country villages are home to scenes of political unrest and ideological passions.

This area extends around the dormant volcano Mount Vulture, a place of contrasts that go from heavenly villages, to vineyards, to the sea.

Barile – This town is an ancient Arbëreshë settlement where the locals have managed to preserve Albanian language and culture over the centuries. It appeared in the Gospel according to St Matthew in the scenes of the Nativity and of the Massacre of the Innocents.

Vulture Melfese – This area with idyllic landscapes on the fertile volcanic soil was the setting of the movie Io non ho paura (Gabriele Salvatores, 2003).

Maratea – The pearl of the Tyrrhenian Sea, with a panoramic position over the gulf of Policastro, was immortalized in different Italian movies, including A porte chiuse (Dino Risi, 1960), Ogni lasciato è perso (Piero Chiambretti, 2000) and Basilicata Coast to Coast (Rocco Pappaleo, 2010).

The region of Basilicata hosts a number of movie festivals and film exhibitions, for example the festival of Lucania, Potenza and Maratea; the Io, Isabella International Film Week; Cinemadamare and Cinefabrica.

If you are planning a family reunion or friend gathering in beautiful Basilicata, why not treat and entertain them with an unforgettable tour of the region’s film itineraries? Contact Italian Special Occasions DMC for a customized quote!

Along Hollywood’s tracks… in Tuscany