A journey through Sicily’s historic castles 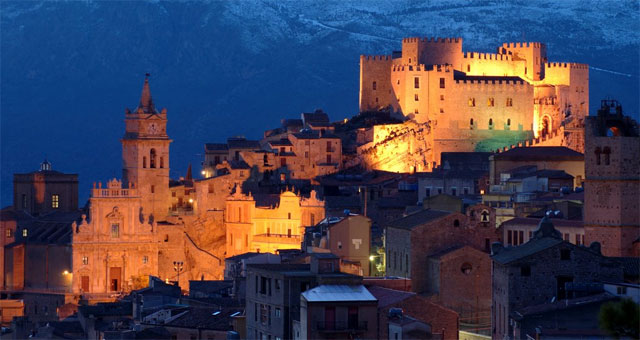 Italy’s largest island conquers so many admirers thanks to its striking nature, cultural mix and history, which also have a positive impact on its gastronomy, lifestyle and local activities. In fact, throughout its history, Sicily was controlled and inhabited by a number of different powers, including the Greeks, Romans, Byzantines, Muslims, Normans, Angevins, Aragonese, Spanish and the Bourbons!

The innumerable changes between the 8th century BC – when Sicily was colonized by the ancient Greeks, and 1861 – when the island was annexed to the Kingdom of Italy, have created a distinct culture and unique melting pot that is quite evident in all the aspects of the daily life. One of the most immediate testimonies of the past, which any visitor can identify and appreciate right away upon arriving in Sicily and throughout the journey, is the architecture.

Baroque churches, gothic buildings, Spanish neighborhoods, medieval hamlets… the list is never ending. But in today’s post we would like to focus on some of the most magical remains from the past: castles! Built initially as unconquerable fortresses to defend the cities, nowadays they conquer the hearts and imagination of tourists and even of the locals.

There are more than 200 castles across the island, but we have selected some of the most striking, that are also ideal locations for fantastic family & friend reunions, weddings, foodie trips and corporate occasions.

Starting from the north-eastern tip, Castello di Milazzo and Cittadella di Messina dominate the sea that separates Sicily from the Italian mainland. The former was probably built by the Arabs around 840, and was subsequently modified by the Normans, the Swabians, the Aragonese and the Spanish. In the early 1600s, the ancient Milazzo Cathedral was built inside the castle, which also features Neolithic necropolises! The latter, the pentagon-shaped Cittadella di Messina, was built by the Spaniards in the 1500s and later changed by the Bourbons, and became one of the most important fortresses of the Mediterranean.

Proceeding our journey clock wise along the Sicilian coast, we reach Europe’s most active volcano – the majestic Mount Etna, which has had an impact on many local buildings… including the Fortezza di Aci Castello, our next castle. This fortress was built with dark volcanic rock, and is perched on a cliff on the sea. It was used as a fort since Roman times for its strategic location; in 1072 it was conquered by the Normans, and in 1126 it became a property of the Bishops of Catania, who brought the relics of Saint Agatha to reside in the building. After even more changes of ownership, in 1797 it became a prison under the Bourbons.

In the countryside near Mt. Etna and Catania, there is one of the most remarkable monuments built by the Normans, specifically by Roger I of Hauteville. Castello di Paternò is a massive, 34-meter high parallelepiped with dark-stone walls and Gothic-style windows in white limestone.

Our next stop is south of Syracuse, at Portopalo di Capo Passero, where the beautiful Spanish Fort was erected to fend off pirates attacks. It is of Swabian-Aragonese origin, and its gate features a stone coat of arms representing an imperial eagle.

Turning around the southern corner towards western Sicily, we bump into Ragusa and its charming Castello di Donnafugata. Contrary to what the name suggests, the building is not an actual castle, but a lavish noble dwelling of the 1800s. It has a façade in neo-gothic Venetian style, and is surrounded by an 8-hectare park with a small temple, artificial grottoes and a unique stone labyrinth.

We proceed our trip and reach the city that is famous for the Valley of the Temples, Agrigento. Nearby is the Castello di Naro, built in the 1300s by the noble Chiaramonte Family. Located on a hilltop, this solid building features a square tower, added by Frederick II of Aragon, and massive surrounding walls that alternate cylindrical and square towers.

Leaving the coast and exploring the Sicilian hinterland, we can reach the Castello di Mussomeli, near Caltanissetta. It is a masterpiece of military architecture from the XIV and XV centuries, and is probably one of the most inaccessible forts of the island. Built by Manfredi III Chiaramonte, it looks like the building is fused with the calcareous rock on which it stands. The façade is decorated with gothic elements. Inside, there are majestic halls with vaulted ceilings, but also macabre places like the “Prison of Death”, where the condemned were lowered through a trapdoor and drowned.

Back on the road trip, let’s finish crossing Sicily diagonally and reach the unique, breathtaking Castello di Erice (also known as the Castle of Venus). It enjoys a location that is beyond panoramic, on Mount San Giuliano, from where you can admire Trapani, the Egadi Islands, Mount Cofano and the coast. It was built by the Normans as a defensive fortress in the XII century on the ruins of an ancient sanctuary dedicated to Venus.

We finish the castle tour around Sicily by reaching the capital, Palermo, which features different remarkable buildings, such as Palazzo Steri and Castello a Mare. But we will dedicate a few words to the largest Sicilian castle, given its particular historic importance and attractiveness: Castello di Caccamo. It was built during the Norman rule, set on a rocky spur overlooking a valley. The views from up here are simply breathtaking. Among the relevant historic episodes that took place here, is that Matteo Bonello and his fellow conspirators found refuge in the castle following the Barons’ Revolt (1160-61). Inside, you can admire the stables, the auditorium of the theater, the chapel, the servants’ rooms, the prisons, the Conspiracy Room and the impressive Arms Room.

Are you looking for an authentic location where to organize your special Italian occasion? Contact us now and let us help you create an unforgettable event!