Turin, the first capital of a united Italy, offers great cuisine and surprising cultural gems. Current headlines feature it for the Exhibition of the Holy Shroud from 19 April to 24 June 2015, and for reopening its Egyptian Museum after a pharaonic €50 million revamp. However, compared to other Italian towns, Turin is an off-the-beaten-track destination. Let’s explore its treasures in 48 hours, and understand why it is a lot more than just the home to the Juventus soccer team and the Fiat automaker – as it is often erroneously dismissed.

Put on your best walking shoes, as Torino is the ideal city for wandering around by foot thanks to its 18 km of arcaded walkways. Its narrow streets are based on the original Roman grid, and are intersected by broad avenues. This neat layout and the ever-visible Alps to the north, make it easy to move around Turin without getting lost.

We’ll depart from one of the largest squares in Europe, Piazza Vittorio Veneto, which opens up to the Po River and offers a lovely view over the majestic,  Neoclassic-style Church of Grande Madre di Dio and the hillside of the Monte dei Cappuccini. Given the large area of almost 40.000 m² covered by the piazza, you can just imagine how spectacular this place gets in June for the Feast of Patron Saint John the Baptist, with its famous fireworks that gather up to 200.000 people! 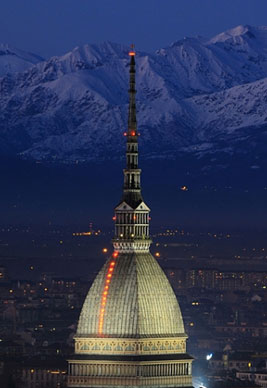 Nearby is the Mole Antonelliana, the symbol of Turin that can also be found on the Italian 2 euro cent coin. Originally built as a synagogue and named for its architect Alessandro Antonelli, it today hosts the National Museum of Cinema. At the time of its completion in 1889, it was the tallest masonry building in Europe at 167.5 meters in height. If you observe the peculiar cupola, you will notice (especially at night) that one side of the four-faced dome features the first Fibonacci numbers written in red neon lights. This is part of the artistic work by Mario Merz, and represents the apparently chaotic growth process that is typical of many natural phenomena.

The Museum of Cinema deserves to be visited, and if you happen to be here in November, you cannot miss the international Torino Film Festival. Finally, the panoramic elevator in the Mole Antonelliana offers you an unforgettable, 360° view of the city and the Alps. Up from the dome, you can identify the typical Roman street pattern and imagine what this area looked like back in the days when it was still called Augusta Taurinorum!

While walking on the main road, Via Po, you will notice that both sides are made up of porticoed walkways, although only one side is continuously covered. The road crossings on this side were covered in the 19th century at the request of the king, who did not want to get wet when walking from Piazza Vittorio to Piazza Castello, which is our next stop. 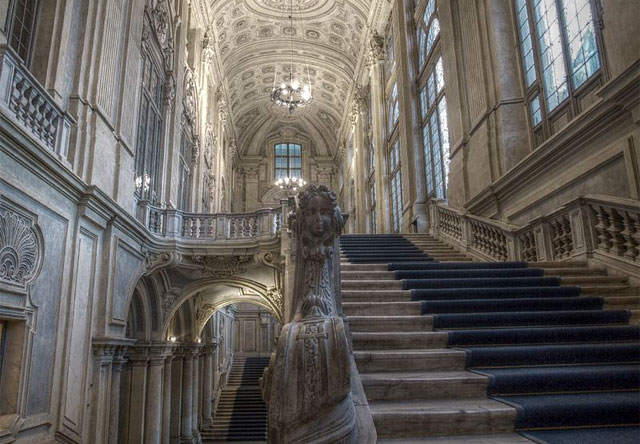 Piazza Castello is the heart of Turin’s historic center. Its beauty is enhanced by the presence of the 16th-century Royal Palace of Turin, and the awkward Palazzo Madama: with its baroque façade and medieval walls, it almost looks like two buildings mashed together! This building also houses the Museum of Ancient Art.

Depending on the season during which you visit Turin, you can witness a show in the Teatro Regio, a truly unforgettable experience. Built in 1740, this is one of the most important opera houses in Italy and Europe. Even though it was destroyed by fire in 1936 and rebuilt in 1973, you can breathe its history from the moment you walk inside. Only the façade remains from the original construction, and it belongs to the UNESCO Residences of the Royal House of Savoy.

The area around Piazza Castello is dotted with more attractions that are usually part of a tourist’s standard itinerary in Turin, and for good reasons. For example, Turin Cathedral is a mandatory stop for many, since it has been the home of the Shroud since 1578. In addition, the Egyptian Museum is the only one outside of the Cairo Museum to be entirely dedicated to Egyptian art and culture, to the point that hieroglyph decipher Champollion commented: “The road to Memphis and Thebes passes through Turin.” 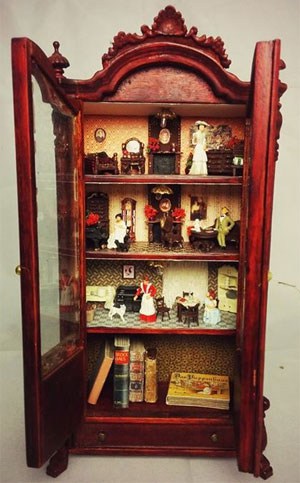 However, the historic center also offers surprising gems like «Balocco Arte», a delightful shop with restored antique toys. Admire precious dolls, vintage teddy bears, ceramic Walt Disney characters, Swiss Reuge carillons that play entire classical music pieces, old carousels or pieces of merry-go-rounds, mechanic nativity scenes… These items have been brought back to life by Daniele Santi, one of the few Italian experts in the restoration of all types of toys.

Our final stop before moving away from the historic center is at Café Al Bicerin, which has more than 250 years of history! Opened in 1763, it is famous for having invented bicerin, a bittersweet drink made of chocolate, coffee and milk. Even Camillo Benso, Count of Cavour – a leading figure in the movement toward Italian unification – used to enjoy his bicerin at a table here.

Our gastronomic journey takes us to the multicultural neighborhood of San Salvario, where we stop at Lo Spaccio Alimentare. It serves regional Italian cuisine, inspired by local traditions, using exclusively seasonal products that are sourced from local farmers! Piedmontese wines, such as Barbera, Barbaresco or Nebbiolo, will complement your meal to perfection.

Proceeding towards the south of Turin, in the Parco del Valentino you’ll come across a place that is a surprise to most visitors… The Borgo Medievale is a medieval village tucked away in the center of the modern city, protected by the garden that surrounds it. What’s most fascinating about this oasis is the history behind it: it was built in 1884 for the Torino Expo, as an exact replica of a 15th-century village in Piedmont.

It is complete with a castle, a church, a prison, and even workshops of potters, blacksmiths and weavers. The Medieval Garden includes the Garden of Pleasure with flowering plants loved by the Middle Ages courts; the Garden of Simple Remedies, used as medication by medieval pharmacists; and the Kitchen Garden full of vegetables and fruit trees with the willow tree and the rye shed.

If you have already visited Piedmont’s capital, what is your favorite attraction in Turin? Feel free to comment below and to suggest additional places that must be part of a 48-hour visit in the area!

Piazza Vittorio, River Po and the Church of Grande Madre di Dio. Image from www.italiavacaciones.es
The neon-red Fibonacci numbers on the Mole Antonelliana, image from guidaspettacoli.com
The majestic Juvarra staircase inside Palazzo Madama. Image by Pantar
Antique doll house at Balocco Arte. Image from Balocco Arte on Facebook
A medieval village in Turin?! Image from museotorino.it