Genuine ingredients, ancient traditions, rich flavors: Sardinian cuisine is a reflection of the local territory, an island that has been influenced by a variety of Mediterranean cultures, and yet has remained charmingly simple. 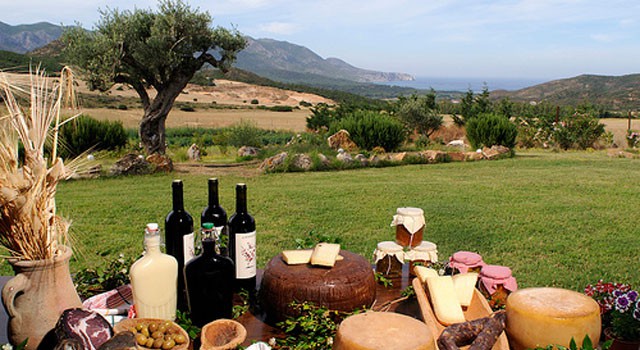 Phoenicians, Carthaginians, Romans, Arabs and Moors are some of the foreign powers that occupied the island for more than 2,500 years, until Sardinia became part of Italy in 1861. The result is a layered culinary heritage. For example, while “the continent” – which is how Sardinians refer to Italy – cooks the popular pasta like ‘spaghetti’ and ‘penne’, in Sardinia you will find the fregula, a pasta of Moorish origin that resembles couscous.

The gastronomy has two clear agricultural and marine identities, determined by the ancient communities of farmers and shepherds in the hinterland and of fishermen along the coast.

Our gastronomic journey starts with the antipasti, and Sardinia offers a wide variety of delicious appetizers. The most popular are the pork and wild boar hams from Villagrande and Talana, usually accompanied by mushrooms, olives and local cheeses like pecorino sardo and casizolu with honey. Bacon, loin and coppa are also appreciated. In the hinterland, cold cuts are often served with curdled sheep-milk called frue or frughe. 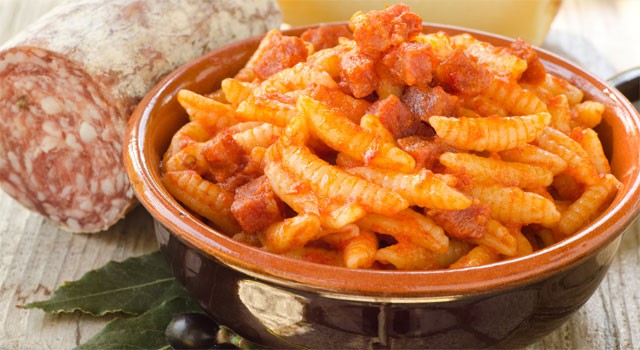 If you think that only one type of gnocchi exists in Italy, you have never heard of malloreddus, small gnocchi made of durum wheat flour that are seasoned with saffron and usually dressed with sausage sauce (alla campidanese). The culurgiones are another interesting first course dish: they are ravioli-style pasta filled with ricotta cheese and mint, or with mashed potatoes, mint and fresh local cheese.

But it is not all about pasta! The delicious panada is a calzone-style pie made of puff pastry and filled with lamb meat (or eel), potatoes and sundried tomatoes. The zuppa gallurese is an oven-cooked soup with Sardinian bread, the stringy casizolu cow cheese, spices and pecorino cheese. For a feast of colors and flavors, we recommend the pane frattau: at its base is the traditional flatbread (called pane carasau) dipped in broth, layered in a lasagna style with grated pecorino, tomato sauce and topped with a poached egg!

Moving on to the main courses, we must start from the most popular one: the su proceddu or porceddu is the piglet (usually weighing 4-5 kg or 20 days old) that is slowly roasted on a spit and seasoned with myrtle and rosemary. One of the island’s most ancient culinary traditions is the roasted suckling lamb, with a soft and white meat that has an intense flavor. But the most particular cooking style is the carraxu method, in which meat (usually wild boar) is cooked in an underground hole, something that gives the meat a unique flavor!

Each of the main sea towns has its own set of fish recipes. Cagliari, Sardinia’s capital, features typical dishes such as the fregula pasta with clams; sautéed mussels and clams; and the cassola fish soup. 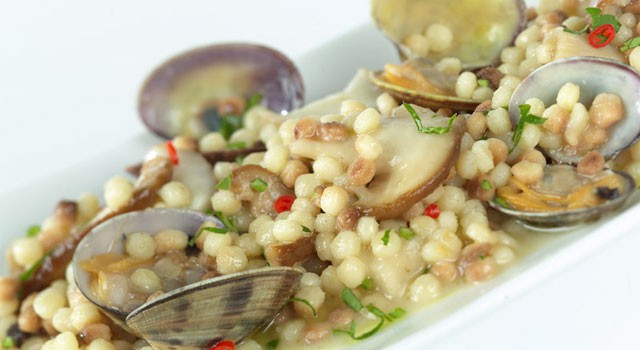 In and around Oristano, locals love eels, gattucio (small-spotted catshark) and mullet eggs or bottarga, which can be enjoyed as thin strings with olive oil or can be grated on pasta.

The Catalan influence is obvious in Alghero, due to its colonial past. Not only is Alghero the only Italian city to have Catalan as a co-official language, but the local cuisine also has features that are typical from Barcelona and surroundings. For example, the popular lobster is cooked in a Catalan style, i.e. boiled with tomatoes, onions and celery, and accompanied by a sauce that is obtained from the lobster’s head, to which lemon juice, salt and pepper are added.

Finally, breaded and fried sea anemones – called orziadas or bultigghjata – are a favorite sea delicacy from north to south in Sardinia. 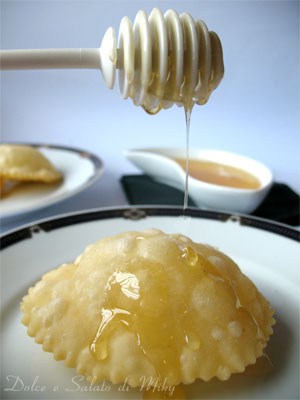 Gluttons, beware! Sardinia offers a never-ending basket of sweet delicacies. However, we have selected some of our favorites, which are desserts that also embody the main characteristics and ingredients that are most commonly used in the island.

The seadas are quite famous even abroad, thanks to the peculiar combination of intense flavors in the thin-rolled pastry: the sweetness of the honey joins the saltiness of the pecorino cheese and the bitter-sweetness of the lemon!

Almonds are at the base of the Gattò de mendula, a crunchy dessert with toasted almonds and seasoned with orange peel.

The delicious local Mediterranean honey gives a unique ivory color to the torrone di Tonara (nougat); while the orilletas, made with flour and eggs, are fried and then dipped in a steaming syrup of honey and water!

Join Italian Special Occasions DMC in a delicious foodie break in Sardinia or in your favorite Italian region! Contact us now for your customized quotation

Street cuisine in Sicily: traditional dishes from the island