10 reasons why you should visit Lake Maggiore

Set along the southern banks of the Alps between Lombardy and Piedmont, Lake Maggiore is Italy’s second-largest lake and, according to Travel + Leisure Magazine, “is the busiest and most untamed”. Its beautiful scenery has been a source of inspiration for a number of internationally acclaimed writers, including Hemingway and Dickens.

The area is still extremely popular with tourists and visitors who want to organize special occasions such as weddings, corporate events, gourmet trips and family & friend reunions. Why is that? Here are our Top 10 reasons why Lake Maggiore is an irresistible magnet for anyone who wants to enjoy some quality time in Italy!

Even though a popular destination, Lake Maggiore is one of the greenest areas in Italy. It includes the nation’s largest wilderness area – the Val Grande National Park – as well as other nature parks and reserves such as Alpe Veglia, Devero, Macugnaga, Fondotoce and the WWF-protected area of Pian dei Sali, among others.

Immersed in this lush vegetation by the lakeshores are some outstanding aristocratic mansion houses surrounded by awe-inspiring gardens. One example is Villa Angeli De Frua, encircled by magnificent old trees in Laveno Mombello (Lombardy’s shore of Lake Maggiore). You should also not miss the marvelous Botanical Gardens of Villa Taranto in Verbania, and the spectacular gardens on Isola Bella and Isola Madre.

Isola Bella is one of the Borromean Islands of Lago Maggiore, situated in the Borromean Gulf 400 metres from the lakeside town of Stresa. It is divided between the Palace, a small fishing village and its Italian garden (Giardino all’italiana), which is influenced by French and English historic gardens and stylistically based on symmetry, axial geometry and on the principle of imposing order over nature.

Isola Madre is also part of the Isole Borromee archipelago, and is especially well known for its gardens that are like no other, famous for the rare vegetable essences hailing from all over the world.

The giant statue of Cardinal San Carlo Borromeo, a Colossus 23.40 metres high, stands above the town of Arona. From here you can admire a breathtaking view of the Lombard and Piedmontese shores of the lake. The little towns of Baveno and Stresa are given an atmosphere of luxury and elegance by the many aristocratic mansions in their territory. Romantic and sophisticated, every year these gems of the lake attract thousands of tourists from all over the world.

Spectacular views are also offered by the towns of Cannobio, Cannero, Oggebbio and Ghiffa, which enjoy incomparable panoramas of the Swiss, the Lombard and the Piedmontese shores of the Lake. In towns such as Castelletto Ticino you will find treasures like the Torriani-Visconti Castle, a medieval fortress with a massive square keep. Cannero Riviera, on the road to Switzerland, boasts a marvelous view of the Malpaga castles, the so-called “Castles of Cannero”, picturesque ruins occupying two little islands near the shore.

Each community along Lake Maggiore has its own history and traditions. When visiting the area, you should not miss unusual places like the Hat Museum on Ghiffa and the Umbrella Museum in Gignese.

To admire Lake Maggiore’s beauty through the centuries and through art, the Landscape Museum in Verbania Pallanza contains a large collection of paintings, sculptures and objects of archaeological interest. In Santa Maria Maggiore in the Vigezzo Valley, known as the “Painters’ Valley”, the Rossetti Valentini Museum has a fine collection of works by the many excellent artists who have worked in the valley.

Just nearby, west of Lake Maggiore is another beautiful water body, Lake Orta. Here you will find the two modern Museum of Design and the Museum of Taps. While ancient traditions and customs are on display in the Museum of the Mountains in Macugnaga and the Museum of Woodworking in the Strona Valley.

Lake Maggiore is heaven for those who love trekking and cycling immersed in nature, the list of eco-trails is never ending! The area is also ideal for golf lovers: Alpino, Pian di Sole, Bogogno and Varese are some of the Golf Clubs that will allow you to practice your swing in some of Italy’s most characteristic and natural spots.

Since we are exploring a lake, there are obviously a number of water sports you can enjoy here too, including canoeing, kayaking, rafting, sailing, water skiing and scuba diving. An important sailing date is the Verbania Vela Festival in June, with regattas, concerts and food and wine events taking place along the shores of the lake.

Traveling to Lake Maggiore during winter? No worries! There are fantastic ski centers in the Formazza Valley with facilities for downhill and cross-country skiing; snowboarding rides in the Antigorio Valley; easy ski itineraries in the Antrona Valley and expert runs on the slopes of Monte Moro in the Anzasca Valley.

One of the main features of Lake Maggiore is a mix of cultures and peoples: the Walser from nearby Switzerland, for example, have settled in the Anzasca and Formazza Valleys.

Folklore traditions are celebrated with feasts dedicated to religious festivities, local costumes and food. Among them, the San Bernardo Fair in Macugnaga (a traditional local fair with wood sculptors’ competitions); the Raduno degli Spazzacamini (chimney sweepers’ day) in Santa Maria Maggiore; and the Underwater Nativity Scene in Laveno Mombello (a traditional Christmas Nativity Scene visible on the lake bottom thanks to 42 statues on 5 metal platforms2-3 feet below the water surface).

We began this post by mentioning how Lake Maggiore was mentioned by important writers in their masterpieces. Nowadays, the connection with writers continues in the many literary events held annually, including: the Stresa prize for Fiction; the Editoria & Giardini garden-themed book festival; and the Fabbrica di Carta book fair.

Classical music events include the Settimane Musicali of Stresa from May to September, and the “Classicamente” series of concerts held in Verbania in May and June. Arona hosts the International Organ Festival “Sonata Organi” in June and July. The Acoustic Guitar Festival “Un paese a sei corde” is held on Lake Orta from June to September, while the city of Novara usually hosts the Gospel Festival every September.

Spirituality, mysticism and art come together in the wealth of beautiful churches and cathedrals found everywhere in the Lake Maggiore area.  Some not to be missed are the ancient church in the village of Carmine Superiore near Cannobio, high on a cliff looking directly over Lake Maggiore; the Walser church in Macugnaga near the seven-hundred year old Lime Tree; the beautiful church of Saints Gervasio and Protasio in Domodossola, built on the ruins of an earlier Romanesque Church; and the parish church of Ghemme in the Novara hills area with its splendid Baroque facade.

The vineyards around Lake Maggiore produce some full-bodied, fragrant wines such as the Ghemme DOCG, the Nebbiolo DOC, the Barbera DOC and the Vespolina DOC.

If you are looking for more tastes to explore with you palate, the terraced hillsides of the Ossola Valley offer the Prünent, Neuv Bruschett and Cà d’ Matè.

The abovementioned wines will complement traditional dishes of the area to perfection. Classic local cheeses are the Ossolano d’Alpe, the Bettelmatt with limited production, and Mottarone. But the most famous product is the Gorgonzola, made made in the Varese and Novara areas and in the surrounding hills.

Just as famous are cured meats like the the mortadella of the Ossola, the raw ham and violini di capra (cured goat’s leg) of the Vigezzo Valley, and the gourmet salamis such as Salam della Duja and Fidighin Pat, both made with prime pork meat.

For over 500 years rice has been the “king crop” of the Novara area, characterising its agricultural economy and defining its landscape. A wide range of varieties of rice are grown here, including classics such as Arborio, Roma, Sant’Andrea.

Finally, if you are looking for the perfect location for a destination wedding, corporate event, gourmet trip and family-or-friend reunion, Lake Maggiore has a rich list of authentic places for your special Italian occasion. 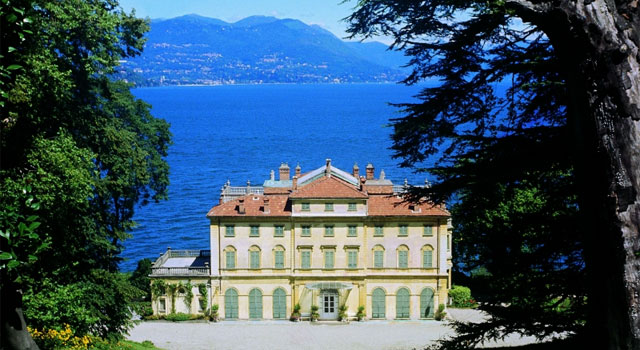 Outstanding among the villas – especially for unique weddings – is Villa Faraggiana. An elegant building separated from the street by a great gate guarded by two crouching marble lions, it was built in 1855 as the summer residence of the aristocratic Faraggiana family from Novara. The Neoclassical-style façade is ornamented with high reliefs depicting the allegorical Roman divinity of Fame; five medallions with the portraits of Dante, Boccaccio, Petrarch, Ariosto and Tasso;  and eleven busts of other illustrious Italian figures.

The area also boasts a long tradition in the meeting and convention hosting sectorwith many excellent venues and services, and unrivalled hospitality facilities: 394 hotels and 494 convention meeting rooms, with a total capacity of 49,551 seats.

Are you organizing a special event on or near Lake Maggiore? Contact Italian Special Occasions DMC for more ideas and to organize a special occasion with flawless logistics in Italy.

Fiastra: eco-tourism and family fun in the Marche region

5 reasons to travel to Italy in fall & winter Get inspired by the locals: traditional June Events in Italy