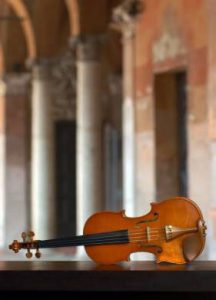 Today’s topic is… music! In particular we would like to tell you more about the city of Cremona, in the region of Lombardy, which is especially distinguished for its musical history.

In fact, some of the earliest and most renowned luthiers came from Cremona, including Guarneri, Stradivari and several members of the Amati family. Furthermore, the town’s most famous citizens include talented musicians such as Monteverdi and Ponchielli, who contributed to the start of an important tradition in the world of music concerts, for instance the Monteverdi Festival that still today celebrates Baroque music every year.

The Cathedral of Cremona had become the center of organized musical activity already in the late Middle Ages. From the 16th century onwards, the town became one of Italy’s and Europe’s main centers of musical instrument manufacture, beginning with the violins of the Amati family, and later the products of the Guarneri and Stradivari shops. Even today, their work is widely considered to be among the best in string-instrument making.

Nowadays, over two hundred violin-maker workshops keep the tradition alive and Cremona is still renowned for producing high-quality instruments. The city also hosts a prestigious international school of violin making with students from all around the world.

If you plan on visiting Cremona, you can book a visit in the workshops to witness the process of creating violins. Also, coming up on the 13th of September 2013, Cremona’s Museum of Violin will open. It will be a technologically advanced building with special rooms and acoustics where visitors will be able to appreciate each and every aspect of the this string instrument.

The opening will coincide with the start of the StradivariFestival from 14th September to 13th October 2013, involving exhibitions, concerts and meetings with artists and artisans to re-live music history and tradition from the Renaissance up to nowadays.

A different side of Venice: painting, music and gondola makers Private Tours in Italy’s Music Cities